Based in Rapid City, South Dakota, deep within the heart of bison country, the Dakota Territory Buffalo Association was formed in 1996 by a group of bison producers from a twelve-state area and two Canadian provinces.

The DTBA, as the organization is commonly referred to, was formed to promote and educate the public about the growing bison industry. Over the years, the DTBA has grown to become a leading regional bison organization. The slogan used by the DTBA is “The Producer’s Association” to reflect the fact that the association belongs to, and works for, the producers who make up the membership.

The DTBA is unique in that its membership transcends state boundaries and continues to grow every year. While many state and regional bison organizations focus on a single state, the DTBA does not limit itself to only South Dakota. Currently, its membership represents fifteen states and two Canadian provinces.

The DTBA holds its annual Winter Conference in Rapid City, SD, in conjunction with the Black Hills Buffalo Classic Show and Sale, featuring the Young Gunz and Girlz Going Wild performance tested classes for breeding bulls and heifers. These two events are well attended and are a great way for new bison producers to meet veterans of the bison industry, and for those veterans to reconnect with the bison community.

The Association also hosts education seminars, ranch tours and summer meetings. Additionally, we cooperate with surrounding bison associations and the National Bison Association to bring new and improved information, technology, and education to our membership.

We invite you to learn more about this dynamic organization by exploring this site or contacting the DTBA. 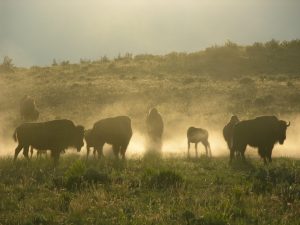